Please confirm that you are over 18 years of age: 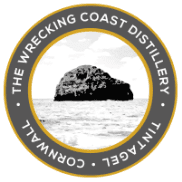 Buddies Avian and Craig have dabbled in drinks for years, although from the drinking side of the bar. Having lost his taste for beer, Craig turned to spirits, becoming a whiskey devotee. Avian soon joined him and, being analytical sorts, they spent many evenings carefully examining spirits to find out their favourites.

However, whiskey was temporarily put to one side when they discovered the world of craft gin. A pre-rugby match gin and tonic became the start of extensive gin research, as they turned their attentions to pulling apart the flavours in as many gins as they could, searching for their perfect bottle.

By this time, Avian had escaped from London and moved to Tintagel in Cornwall. Craig was still in North London and, having left the world of marketing, was looking for a new project. Travelling back and forth they continued to dig into the world of gin.

After one especially in-depth weekend of research, still without finding the elusive perfect bottle, Anita and Claire – Craig and Avian’s wives – challenged them to stop playing and actually get out and make the gin they wanted.

A few weeks later, a business plan, of sorts, was written.

Moving into the garage underneath a bakery in Tintagel, down the road from Avian’s house, they bought their first still and began to experiment. The plan was simple: bring together the flavours they loved in gin and make something they wanted to drink. Finally, after much taste-testing, and feedback and unexpected distilling advice from drinkers in the local pub, Wrecking Coast Clotted Cream Gin was born.

Growing slowly, they moved from the bakery to a long and thin room in nearby Delabole. When they outgrew that, they moved again to a bigger building, what is now The Wrecking Coast Distillery in Camelford. Once part of a chemical production facility, it still has a lab, where Avian continues to experiment, as well as more stills than before, a bottling line and some oak casks full of interesting spirits…

While gin had taken over their lives, whiskey was not far from Craig and Avian’s minds – still a tipple of choice when not drinking gin, they realised that maybe they could use their approach to creating a gin they liked, to whiskey.

With whiskey as an end goal, they started to experiment, developing the parts of the process they would need to get there, years down in the future.

First, they turned to brewing and rather diving straight into using grain, the base for whiskey, they went with something a bit simpler – sugar cane. First using richly flavoured Muscovado Spirit sugar and then dark and sticky molasses, they brewed and distilled a Muscovado Spirit and a rum. Breaking down the flavours produced and how they could be selected and concentrated through distillation started laying the groundwork for making their own grain spirit, and eventually whiskey.

Next they began to look at maturation – key to allowing whiskey to develop from a raw and unrefined new-make spirit or White Dog into the elegant and complex drink that Craig and Avian wanted to create. Adding pieces of wood to small batches of Muscovado Spirit and rum, led to filling small casks, and then larger casks, building on the knowledge gained as they scaled up. With the principles and logistics in place, it was time to plan the next step – actually making whiskey.

To start with, Avian and Craig needed to work out what style of whiskey they wanted to make. With Craig a fan of the richer and sweeter end of the bourbon spectrum and Avian loving big, spicy American rye whiskey, a sweet and spicy rye was the perfect halfway mark. They then looked for a whiskey that they could use not only as inspiration for their own spirit, but could also continue to develop, continuing to experiment while their own matured.

They found a 8-year-old rye, distilled in Germany and finished in sherry casks. It had the big spice and complexity that Avian was looking for, as well as the rich sweetness that Craig loved. They secured stocks of it, preparing it to launch their whiskey project as well as holding some back to fill into casks to continue their ageing experiments.

With an end goal established, they approached a local craft beer company to brew their rye wash – the beer that is distilled to make new make spirit. Initial tests led to a finalised recipe and plans were laid to start production.